How to run a Raspberry Pi off a battery

The easiest way for a plug-and-play experience is to run it off a power bank made for recharging phones. They’re the easiest because everything works; but they are also the least customizable.

If you want a more customizable solution, consider getting the PowerBoost 1000 Basic which will allow you to step up voltages from 1.8V which means you can use 2x NiMH batteries or one lithium battery to power your Raspberry Pi Zero 2 W.

Examples of battery-powered applications with the Pi Zero 2

Using the Raspberry Pi Zero 2 on a battery makes sense for applications such as,

In order to log your uptime, you should install the package uptimed.

Open up a Terminal and run sudo apt-get install uptimed

After installation, you need to start and run the service by running:

Since we’re trying to establish how long of a battery runtime we can expect, it’s important to ensure uptimed’s config files allow much shorter logging intervals than what’s default.

By default, uptimed only writes to the logs every hour, and will not record any records shorter than one hour.

By default, both variables are set to one hour (either 3600 seconds or 1h). By setting them to 60 seconds, we can log the battery’s runtime down to the minute.

This represents the best-case battery life that you would get out of a default Raspberry Pi Zero 2 W. 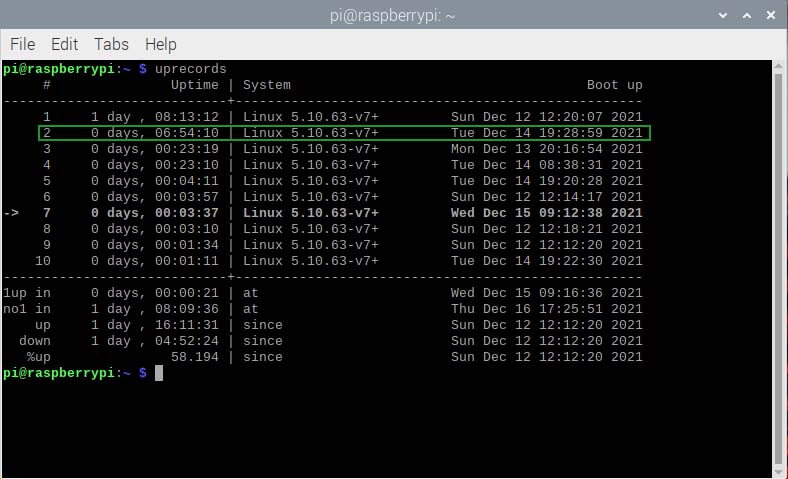 In reality, you’re likely to have certain attachments to it such as HDMI or something on the GPIO. So, the next test will be a better way to find out what’s the worst-case scenario.

In order to run a stress test, I ran the command,

The –cpu-method fft and -cpu 4 were used based on a conclusion on the Raspberry Pi forum, which found that it drew one of the higher loads

I immediately noticed the CPU utilization shooting up to 100% upon executing this command.

You can further reduce power consumption by turning off various components of the Raspberry Pi Zero 2 W.

Here are the power savings you can enable:

You can save 5mA by turning off the LED. Here’s how.

If you just want to run it once, you need to run this command in terminal:

However, if you want the LED to be permanently turned off at reboot, then open up your terminal and type in:

Once you’re in the file, scroll all the way to the bottom and type in these lines:

After your next and subsequent reboots, your Pi Zero 2 W’s green LED will stay lit until it boots the OS up, whereby it’ll be turned off.

By the same token, you can permanently turn off WiFi by running the command

To make this command run on reboot, open up your terminal and type in

Scroll to the bottom and type in this line

Once you reboot, you should see that your WiFi is disabled at startup.

If you have built a battery-powered device, chances are much higher that you won’t be running a monitor.

Or perhaps you plan to run your Raspberry Pi Zero 2 W in headless mode. That’s also another reason to disable HDMI.

The contradictory thing here is that I had to enable WiFi, hence incurring power drain, in order to disable HDMI so that I could control my Pi Zero 2 via SSH. So, choose your battles.

Before you disable HDMI, you will need to use the legacy graphics driver.

Open up a terminal and run:

Now that this is done, you can go ahead and disable your HDMI by running the command:

Just above the line “exit 0”, type in /usr/bin/tvservice -o

To re-enable HDMI, just delete this line. I did it via SSH.

In order to do this, you’d want to open a terminal and type in:

Type in maxcpus=1 in the first line and save the file by pressing CTRL + X and saving by pressing Y.

Upon reboot, you can check if your modification worked by running lscpu in terminal.

Everything about the Raspberry Pi Pico W

Enter your email below 👇